The quickly-growing state-legalized marijuana industry creates a number of unique compliance and AML/BSA challenges for Financial Institutions (“FIs”).^
MRB Monitor, which helps financial institutions mitigate risk related to the industry, has identified 8,000+ Marijuana Related Businesses (“MRBs”). As such, it may be naïve to think that MRBs are excluded from the US financial system simply because banks are generally reluctant to work with the marijuana industry. This supposition is further supported by recent marijuana-related Suspicious Activity Report (“SAR”) activity disclosed by FinCEN to Dynamic Securities Analytics, Inc. pursuant to a Freedom of Information Act (FOIA) request. 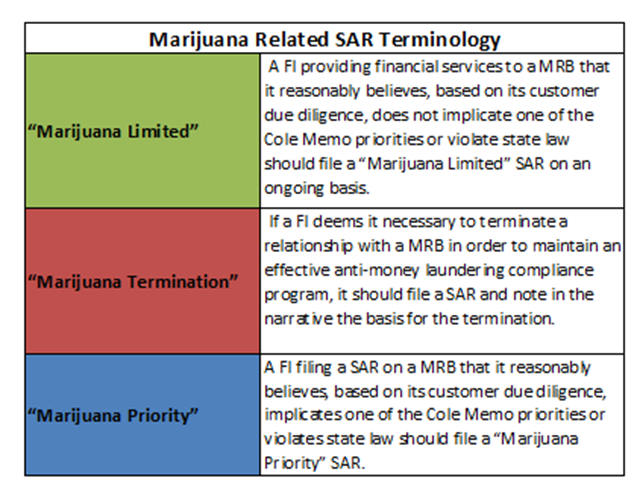 Depository Institutions (“DIs”) filing Marijuana SARs were located in 48 states plus DC and Puerto Rico (only HI and WY had no filers). This compares to “at least 42” states and DC in our April post. FinCEN received Limited SARs from filers in 32 different states; Priority SARs from 26 states; and Termination SARs from filers in 44 states.

Perhaps more interesting, FinCEN provided detail that SAR “Subjects” (the individual or entity involved in the suspicious activity) were located in all 50 states, DC and Puerto Rico…and 34 unidentified foreign countries.

“A marijuana-related business engages in international or interstate activity, including by receiving cash deposits from locations outside the state in which the business operates, making or receiving frequent or large interstate transfers, or otherwise transacting with persons or entities located in different states or countries.”

All of this data reiterates a core tenant from our April post:

“Financial institutions operating only in states where marijuana is illegal should not delude themselves into believing that ‘the marijuana industry is those other states’ problem.’ “

FinCEN reported that 388 depository institutions have or had banking relationships with MRBs. Of those, approximately 266 currently have “open” accounts with MRBs. FinCEN determined the estimate of “open” account by the following method:

In the opinion of these authors, this 266 number should be taken with a grain of salt since the number includes Priority SARs. A Priority SAR means that a known MRB customer “implicates one of the Cole Memo priorities or violates state law.” In effect, this indicates that the MRB account is likely to be terminated.

Based on marijuana SARs filings by type by primary regulator, credit unions – as represented by their NCUA regulator – have the most “open” arms to MRBs relative to other DIs. Only 9% of NCUA SARs were Termination while nearly 80% were Limited, indicating a relatively higher percentage of on-going relationships between MRBs and credit unions. On the opposite end of the spectrum, OCC-regulated DIs had the highest percentage of Termination SARs at a 74% and lowest percentage of Limited SARs at 20%. On a side note – as portrayed in our related post Securities Brokers have (Relatively) Open Arms to Marijuana Businesses– at 82%, SEC-regulated financial institutions are the only category to have a higher marijuana Limited SAR ratio than credit unions. 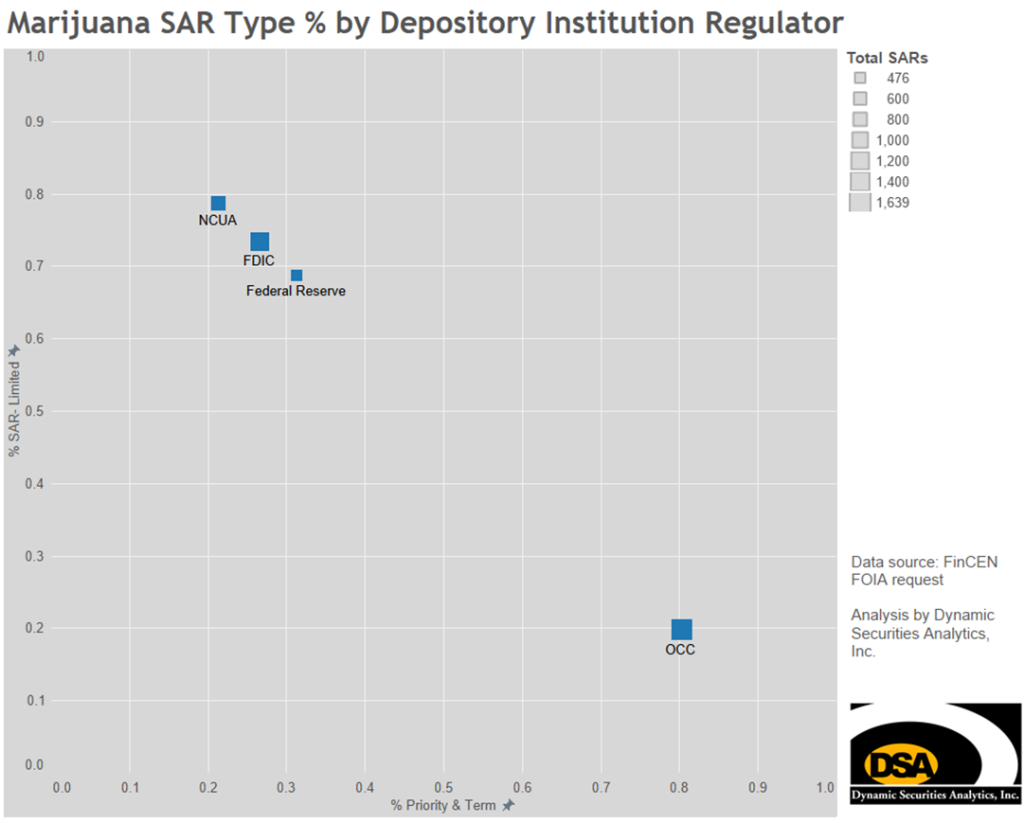 FDIC- and Federal Reserve-regulated DIs fell in the middle of the range at 18% and 21% Termination SARs (73% and 69% Limited SARs), respectively. Federal Reserve-regulated DIs’ relatively low Termination percentage is of note, given the language in the Federal Reserve Bank of Kansas’ motion to dismiss a lawsuit filed by a credit union seeking to serve MRBs. The Fed’s motion says that a court forcing it to provide a master account would compel the Fed to “facilitate criminal activity” and that “Even transporting or transmitting funds known to have been derived from the distribution of marijuana is illegal.”

^ See: “Conflict and Uncertainty- Due Diligence Challenges for Marijuana Related Businesses” (originally published in the Sept/Nov Vol 14 No. 4 issue of ACAMS Today magazine) and “Practical Coping Strategies for Ever-Changing Marijuana Laws” presented at the Sept 2015 ACAMS conference in Las Vegas.

* FinCEN guidance on marijuana-related SARs states that specific keywords such as MARIJUANA LIMITED should be used in the narrative section of the SAR filings. DSA requested FinCEN data from SARs using the specified keywords. It is unknown whether FinCEN limited its data query to only the narrative section of SARs or if they also queried other text fields. The analysis above assumes that FinCEN has consistently used the same query methodology in the August 2014, January 2015 and July 2015 reports. FinCEN’s own analyst notes “The total number of SARs received does not equal the sum of each type of SAR (Limited, Priority, and Termination) due to several of the filers using more than one key phrase in a SAR narrative.”

The Marijuana Businesses Access to Banking Act of 2015 bill’s stated purpose is: to create protections for depository institutions that provide financial […]